The Words and Music of Patti Smith (The...

Many consider Patti Smith the godmother of the punk. This label is inaccurate. Although she had the energy and disrespect that later characterized the punk generation, she was inspired by the beatniks and Jim Morrison, Bob Dylan, the Rolling Stones, and many other characters the punk rockers responded to. However, it acted as a bridge between the two generations and found common ground with both. The experimental and rebellious nature of her work has made Smith and her band an integral part of the New York Art Rock scene of the mid-1970s, which revolved around the CBGB club on the Lower East Side. Smith's 1975 album, horses, was the first album from the scene and established Smith as a great artist. Smith's androgynous performance on Robert Mapplethorpe's cover has become one of the most famous recordings in rock history. Musically, the album was groundbreaking for its mix of improvisational music and Dionysian lyrics. As an artist and a woman, she broke new ground.

Smith released three more albums before suddenly disappearing from fame in 1980. In the mid-90s she reappeared to change her image and her enthusiastic fans with her dynamic performances. Smith's influence on rock music – her rebellion against gender roles, her charismatic performances, her fusion of poetry and music, and the way she aged as a rock star – was enormous. She has redefined what it means for women to be rock performers, paving the way for many other popular musicians to follow her. Individual chapters examine individual albums and explain parallel developments in Smith's life. Tarr concludes his work with a study of the influence Smith has on pop culture and on rock & # 39; n & # 39; Roll in general had. Patti Smith is a guarded and private person and little has been written about her. In this searching analysis of Smith's life and work, author Joe Tarr has closed a major gap and provided a vital guide to the legendary artist's career. 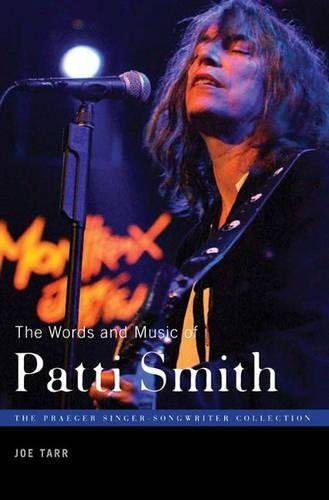 The Words and Music of Patti Smith (The...
More Detail ...