The Legacy Of Charles Munch

The inspiring French maestro on CD: an unrivaled retrospective that spans three decades of glowing music making, including recordings that are new to CD and long unavailable, remastered, and fully documented. In the memories of most record buyers, Charles Munch was indelibly and almost exclusively associated with the RCA label thanks to a series of spectacular albums that he had made during his thirteen-year tenure as music director of the Boston Symphony Orchestra. Also from television programs of this time the picture of the white-haired maestro with angular jaws emerges, which pushes his Boston musicians with ever increasing intensity with gestures of elementary passion as well as delicious layering. However, these characteristics were also present in the recordings that Munch had made for several other labels during his career. They have now been put together by Eloquence in a set that offers the roundest portrait of the conductor to date throughout his career. His earliest recordings were made in Paris in 1938 for Polydor and for L’Oiseau-Lyre by concert works by Ravel, Widor (the rarely heard fantasy for piano and orchestra) and Haydn: these were newly transferred by Mark Obert from original masters – Dorn. At the beginning of his post-war contract with Decca, recordings of the French repertoire (Berlioz, Bizet, Debussy, Fauré, Franck, Ravel, Roussel, Saint-Saëns) and Austrian-German symphonies (Beethoven 8, Mendelssohn 5, Schumann 4)) were made in London a sacred rite conducted by the orchestra of the Société des Concerts du Conservatoire de Paris, which he had led since 1939. This is no less true for a ragged but exciting “Pathétique” symphony from 1948, which has now been recorded in Paris. After the Boston years, Munch partnered with the New Philharmonia Orchestra (1965-57) to produce Bizet, Offenbach, and Respighi albums, in which the conjurer’s magical fire remained unbroken. He also returned with them to a suite from Roussel’s Bacchus et Ariane ballet, which was always a Munch favorite in concert. His last studio letter – from Budapest 1966 – about the Symphonie fantastique is also here after having been published by Fidelio, Hungaroton and Philips, but was not available for a long time. The set ends with more Berlioz – Munch’s only recording for the Deutsche Grammophon der Grande messe des morts. This was done in Munich in 1967, a year before his death, and is a moving testament to the conductor’s career-long commitment to realizing the most original orchestral and acoustic possibilities that a composer has explored, who like Munch himself has always gone his own way . 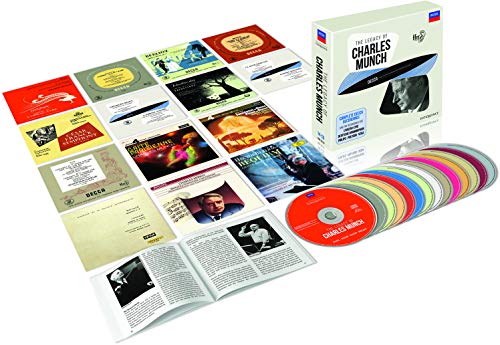