Let's Make Some Noise: Axé and the African...

Clarence Bernard Henry's book is the culmination of several years of fieldwork on sacred and secular influences of asé, the West African Yoruba concept that spread throughout Brazil and throughout the African Diaspora. Àsé is presented as the power and creative energy given to people by the spirits of the ancestors who act as guardians. In Brazil, the West African Yoruba concept of asé is known as axé and has been reinvented, passed on and promoted in Candomblé, an Afro-Brazilian religion practiced in Salvador, Bahia.

The author explores how the concepts of Ax and Candomblé religion were adopted and reinvented in Brazilian pop music and culture. In interviews with practitioners and local musicians, it explains how many popular Brazilian music styles such as Samba, Bossa Nova, Samba Reggae, Ijexá and Axé have musical and stylistic elements derived from the Afro-Brazilian religion. The book also describes how young Afro-Brazilians combine Candomblé music with African-American music such as blues, jazz, gospel, soul, funk and rap.

Henry advocates the importance of axé as a unifying force that holds together the secular and sacred afro-brazilian music landscape. 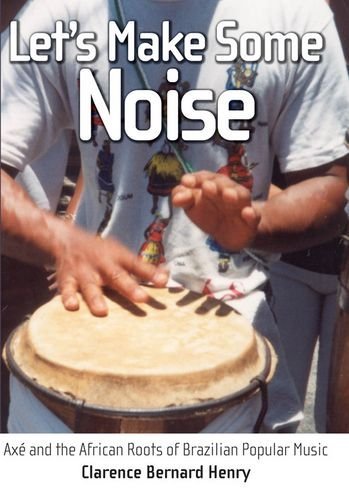 Let's Make Some Noise: Axé and the African...
More Detail ...